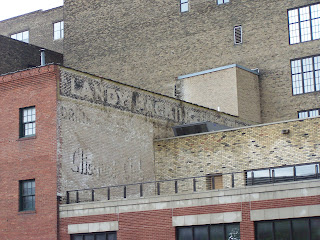 This sign takes us into the Warehouse District, and into territory that's already been covered by Writing On The Wall. The lower part of this sign is for Cliquot Club, which WOTW says is a brand of soft drink that was absorbed into Canada Dry. The brand apparently dates to the 1880s, and once included a vast bottling and distribution network before fading away in the 1960s.
I'm also interested, however, in the top part of the sign, for Landy Packing. The company or its affiliate rendering plant seems to have been the subject of a noxious fume complaint in St. Cloud in 1968 (pdf), and the subject of fairly strong criticism from the 8th Cir. in 1980 for its inconsistent efforts to delay the resolution of a labor dispute resulting in an adverse award. I've not been able to find what became of the company, but if there was a rendering operation downtown, my nose and I are not unhappy that it's gone. Someone might want to tell this Chinese maker of packaging materials about the association, though.
This one is at 417 N. 2nd Ave., and here's another shot from a different source.
Posted by Adam at 7:31 AM