Babe The Blue Ox Was Stabled Across The Street 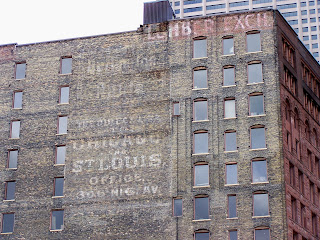 This one hearkens to fundamental reason we are all here. Lumber. Poised at the northernmost naturally navigable point of the Mississippi River, next to an abundant source of natural power in the form of St. Anthony Falls, it was lumber that first put Minneapolis on the map. Trees were felled in the northern forests, floated down river, and brought to the mills that lined either side of the falls. Flour, and even textiles came later, but what first made this the Mill City was saw milling.

The Lumber Exchange doesn't date to those early days, but it's a reminder that even before agriculture there were trees and there were saws. Today there are offices, retail on the ground level, and I guess a dance club of some sort as I walked by one weekend evening in February and saw all manner of deranged youths standing in line dressed to party and without coats. Ah, youth. It's frozen.

The Historical Society has quite a few pictures of this old gem. The city tells us that construction started in 1887, with a second phase completed in 1890. As the name suggests, it was meant to be a center of lumber trading, but its function drifted as the lumber industry faded. Wikipedia tells us that it's the oldest high rise in Minneapolis and that it's the oldest building outside of New York of more than 12 floors. It was billed as one of the first fireproof buildings, but I'm not sure if that was before or after the big 1891 fire that seems to have devastated it and its neighbors.

In addition to the sign labeling the building, there is what seems to be a separate sign for something that had offices in Chicago and St. Louis, but I can't make out any more of it.

The building sits at Hennepin and 5th Ave. S., but the sign is prominent near the intersection of Hennepin and Washington.
Posted by Adam at 11:02 PM