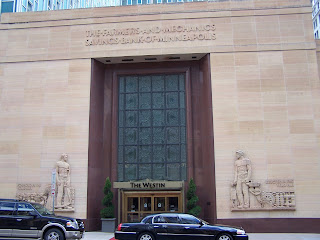 I'm straying from paint on brick again, but again, I think this is special enough to include. Here we have the former Farmers and Mechanics Savings Bank of Minneapolis, which helpfully tells us it was founded in 1874, with this particular structure going up in 1941. It seems that this is actually the "new" headquarters for the bank, which was previously located in what is now Sheik's strip club according the the city's landmark website. If I was to pretend that I knew something about architecture, I might say that this is Art deco. Wikipedia says I'm right, so I'm still totally willing to teach at your school.
As you can also tell from the photo, the building now houses a Westin Hotel with B.A.N.K. restaurant and bar occupying the main lobby of the old bank. The restaurant preserves much of the space's beauty and grace and makes interesting use of the old vaults.
As for the bank itself, it's no longer with us. It was failing when it was acquired by Marquette Bank in 1982 in a sale assisted by the FDIC. At the time, Marquette Bank was owned by Carl Pohlad, whose family still owns the Minnesota Twins. Marquette was eventually sold to First Bank in 1993, which in turn was later merged into U.S. Bank.
As usual, I'm not the only one whose has taken this picture. There's an additional sculptural element on the east facade as well: 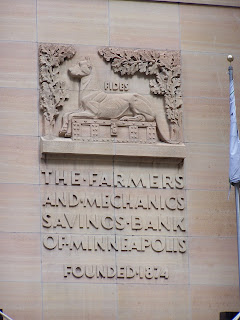