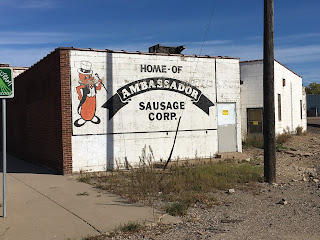 I've seen this one before, but wasn't sure whether it was still an operating business (it must not have been as at one point this was an Asian seafood business). But having read that this building is to be the future home of a brewery or distillery with a rooftop patio, this time I knew it's a ghost and thus qualifies for inclusion here.

The sign is on the side of the former sausage factory at 427 Harrison St. NE, right up against the train tracks (train-people tell me this particular configuration of tracks is called a wye). Street View gave me a bit of initial confusion as the sign was not visible when last Google went by in 2014. Upon closer inspection, it seems there used to be siding on the end of the building that has now been removed.

Obviously, I hope they decide to keep the sign as they renovate the building. Unfortunately, it's painted over with a generic mural of wheat in the rendering included with that Business Journal article. Here's hoping the brewer/distiller has more appreciation for the character a sign like this offers than the architect.

As for the sausages, Ambassador is still an existing brand of Scandinavian-style hot dogs that's been around since 1932. Today it's part of Wimmers Meats, which itself is a division of Land O'Frost (and here I'd only head of Land O'Lakes and Land-O-Nod). Before all of that, however, Ambassador was associated with a 2014 inductee into the Minnesota Women Business Owners Hall of Fame (I did not know there was such a thing, but sounds cool to me).

Ethel Arnold began working at what was then called the Sanitary Sausage Company (mmmm... sanitary) in the 1930s, later moving into the front office as a bookkeeper. After the drowning death of her first husband, Ethel got remarried, this time to the company's founder. Once he too passed on, Ethel inherited the company, but it was in bleak shape. She used her experience in all aspects of the business to turn the company around and work out of its debt. She also renamed it. Maybe she thought sausages would sell better if they sounded fancy rather than just clean.

Ethel sold the company in 1991, ending the last remaining independently owned sausage company in the Upper Midwest. She died in 2000.

The Hennepin County Library's tumblr (I did not know it had one, apparently there are a lot of things I do not know) has a post on Ethel, including some old images of the inside and outside of the factory. Here's another shot of the sign from flickr.
Posted by Adam at 8:00 AM 3 comments:

Email ThisBlogThis!Share to TwitterShare to FacebookShare to Pinterest
Labels: Food, Nordeast, sausages
Newer Posts Older Posts Home
Subscribe to: Posts (Atom)
See a map of all the signs here. Follow me on twitter at @ajm6792