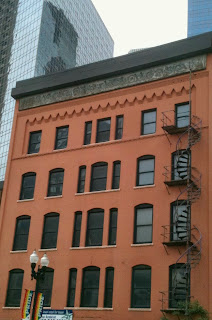 So as it turns out, going by more than once (and in better weather) can prove fruitful and enlightening. A closer look at the front (which is likely hard for you to read but is clearer here) says that Witt's is actually Witt's Market House. The historical society gives us a cool shot of some ladies shopping for meat at the market around 1942. Like grocery shopping, one should not blog about meat while hungry. Especially as Witt's, which at the time had six market locations, was convicted of food safety violations in 1932 relating to fresh meat, before reason and the state Supreme Court saved the day.

Here's another picture from that era, of customers in standing in line outside, showing the street cars and the view across the street. I'm guessing the volume of people means that there was war-time rationing going on. This triptych from 1923 may show a glimpse of the sign, and here's the store with a new paint job in 1948.

Here's a Witt's ad from a 1901 Minneapolis Journal that's just too cool of an interweb find not to share. Anyone want 5 pounds of butter for $1? Going back even earlier, I have to wonder whether the store was an outgrowth of Witt's stockyard and slaughterhouse, which was established in Crystal Lake (now Crystal) in 1879.

This rather random website may explain the over-painted "L" word in that it describes someone with the last name "Lash" as having been a baker at Witt's. I've not yet been able to find what became of Witt's, but I have to run, so I will leave with the speculation that perhaps Mr. Lash took over for the Witt family and repainted the sign.

Finally, here's the fourth Commutator Foundry sign that I missed the first time around: 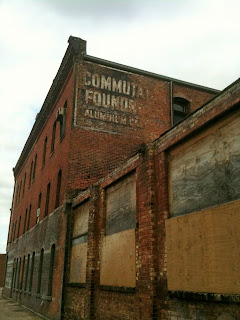