Meanwhile Down On The Farm 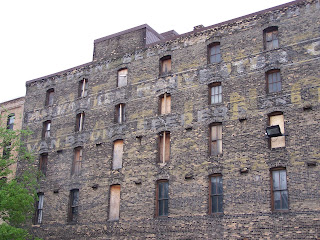 This building at 312 N. Washington Ave. appears to be mostly empty, although the first floor seemed to be the home of the Institute of Production and Recording. Clearly it was once a farm implement dealer in the heart of downtown Minneapolis. There are two signs for Van Brunt Seeder, founded in the 1850s by inventors of an automated seeding machine. The company was apparently the largest farm implement manufacturer in the world as of 1911, the same year it was consolidated into John Deere. The absence of that famous name may mean that this sign dates to even earlier times.
The other ad is for Milwaukee Harvester Company, which was part of a major consolidation in the farm machinery business in 1902 that formed International Harvester and that was eventually challenged under the federal antitrust laws. The New York Times published a notice of the company's acquisition on August 13, 1902 saying that the buyer was unknown.
Agriculture is still big business in Minnesota, but its place at the heart of our culture is fading. I've watched how the Minnesota State Fair has changed over my lifetime. The machinery part of Machinery Hill keeps shrinking. Farm commodities reports are gone from the local news (although as I don't listen to WCCO anymore, maybe I just miss them). TV isn't dominated by agricultural ads. These signs are a reminder of how central farming used to be.
Posted by Adam at 4:37 PM