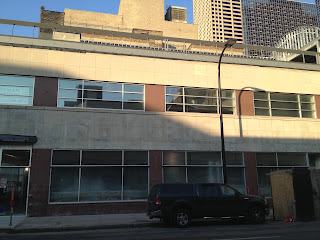 They've been working on renovating the long-vacant building on Hennepin that used to house Shinders and somehow that work has revealed a sort of meta-ghost.  It's not particularly visually interesting, and I'm not sure whether it's really faded paint or the shadow of long-gone lettering.  But if you look very closely, you can see that it says "Snyders."

When I was a kid, there was a Snyder's drug store in strip mall just up the road (ah, the pleasures of suburban living) and a Snyder Brother a little further down near Silver Lake Road and 694.  Youthful me could not quite figure out how these stores could include the same surname but not be related to each other.

Now that the local drug store landscape seems to be made up only of CVS, Walgreens and a few independents (and, yes, Target and Walmart), I thought I'd let this "sign" be an inspiration to try to find out.

So the first thing to note is that the two stores may not have actually shared a surname, and instead I could be conflating homophones (yes, dear reader, I've been known to do that).  The "brothers" store (from which I remember painted faces of happy looking pharmacists on the wall and in the print ads), might have contained some combination of "sch" or "ie", but I can't recall.

So let's start with Snyder's, whose demise was not so long ago.  It traces its history to Max Snyder who sold cigars in downtown Minneapolis starting in 1928 (perhaps at this location?).  The drugs came along in 1931, and by 1939 Snyder Drug was incorporated.  Then a few decades passed, until a bankruptcy in 2001 that started the process of selling off locations to Walgreens and CVS.

Snyder Brothers has left less of a digital trail.  This lawsuit suggests that I'm not wrong in remembering that it existed, and I even got the spelling right.  This comment includes them in a list of chains that helped speed the demise of independent pharmacies.  But that's about all I've got.  At least my memory isn't totally faulty.

As for those drugstores of my youth, the Snyder Brothers, along with the strip mall that used to house it, is gone, replaced by an LA Fitness.  The Snyder's was replaced by a Liquor Barrel. So at least you can get some kind of drug there.

Foreign Lands: From The Association For Creative Building Names 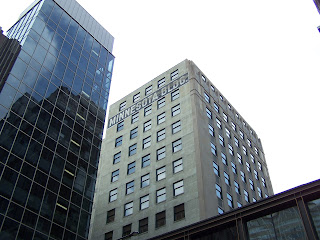 This post #130, so I'm supposed to have something I can sort of call a landmark here.  And I'm also not supposed to have signs from outside Minneapolis.  But I'm having trouble reconciling those two rules right now, as I haven't got any good local landmark ideas at the moment, so I'm going to St. Paul.

The first Google result for this one calls it the "historic Minnesota building" so I'm going to hang my landmark hat on that.  (The antitrust lawyer in me will just note without further comment that the first result is also a Google+ local site.  Hey, look!  Yelp! has a site too.)

You can watch a video of the building's "grand opening" from February of last year, which includes some historical information.  But the building was built in 1929 and was built to be upscale offices, but soon became infested with lawyers.  Keeping up with my architectural credentials, I can tell you that it's Art Deco, and was the first in that style in St. Paul.  It's now mixed use, apartments (137 units with 10 reserved for formerly homeless residents), retail and office space.  Way to go St. Paul!

Wikipedia will give you detailed description of the design.  You can get more photos here and here. 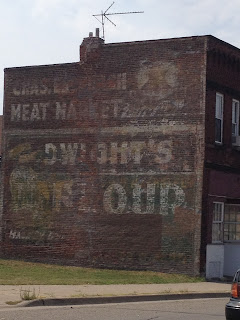 We're back in St. Paul, where I found a gem of a place.  Not surprisingly, it's near the railroad tracks, but it's also right on 7th St, but over on the east side.  I'm not confident that we're going to find a lot in the history category, but it's a pretty cool building with great signs.

Today, it seemed to be low-end housing, although when I stopped there was a fancy SUV parked out front, which in my fantasy meant people planning to renovate.  We'll have to see.

Anyway, as you can see, Charles E. Eschbach seemed to have a meat market here.  It seems the Charles was born in 1890 and lived only until 1959.  His son was also named Charles and is buried in Elmhurst Cemetery in St. Paul.  It seems he might have furnished some meat to a family quarantined due to small pox in 1900, but that's about all I have.

So let's look for the flour.  It seems the Dwight Flour was from Moorhead (speaking of traitorous foreign lands), so that probably explains why the place isn't still operating.  Although this ad suggest maybe they were in Minneapolis too. So confusing.  But one thing is clear. It was made from only Red River wheat. 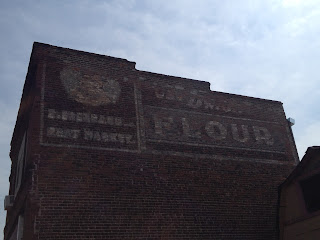 Someone already got better pictures than mine (better light and more capable photographer, probably) and posted them to Flickr.  It sees that some of the neighbors are gone. 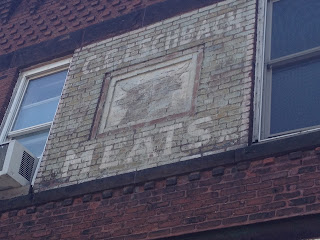 Stop Me If You've Seen This One Before 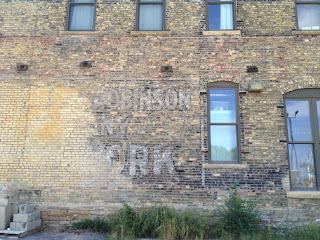 Or better yet, don't.  Because if you've been following along, you have, indeed, scene this one before.  Or to be a bit more accurate, you've seen other parts of these "extensive works" before.  This one is a little down the railroad tracks from the one you've seen before, but presumably they were all part of that same facility at some time.

The news here, if you can call it that, is that I'd swear the missing part of the sign says "Albany" and "New York," although I have to admit it could be bad memories of the bar exam influencing my intuition.  I don't know why it would say that, of course, as it seems that they may have had offices in the Lumber Exchange downtown, but whatever.  Maybe they just had a special affinity for the capitol of the Empire State.

Let's finish up by looking a up a bit (please shield you eyes from the sun): 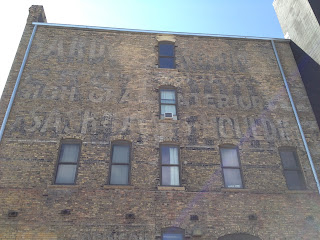 Email ThisBlogThis!Share to TwitterShare to FacebookShare to Pinterest
Labels: manufacturing, milling, North Minneapolis
Newer Posts Older Posts Home
Subscribe to: Posts (Atom)
See a map of all the signs here. Follow me on twitter at @ajm6792