A Different Kind of Ghost

This blog has always been more about what these old signs can tell us about local history.  My favorite signs tell us about how the city used to work and what came before the modern skyscrapers and townhouses.

But by their nature, ghost signs come in limited supply.  I've got more in my files, but I'm at the stage where interesting ones (or at least interesting ones that are still sufficiently legible to provide some clues) are running thin. I recently picked up Neal Karlen's Auggie's Secrets, which gave me a new idea for avenues into local history.  I'm going to try to re-visit the places where Minnesota history happened.  If I get lucky, there will be something of the past to see.  More likely, you'll just have to be satisfied with my feeble re-telling of a tale from local history.

To start, let's look at a with a story relayed in Karlen's book, about this guy: The gentleman in the middle (of this photo from the Minnesota Historical Society) is notorious Minneapolis organized crime figure Isadore Blumenfeld, aka Kid Cann.  But this photo seems to be from the end of our story, apparently having been taken after he was acquitted.

On December 9, 1935, crusading journalist Walter Liggett was was gunned down in the alley behind his apartment at 1825 S. 2nd. Avenue.  Here's an exciting photo of that alley today: 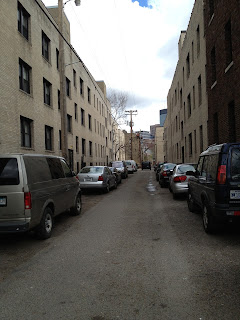 (Yes, that "exciting" was meant to be sarcastic).

Mrs. Liggett, who was present during the shooting, identified Cann as the man wielding the machine gun that day, and he was arrested, tried and acquitted of the slaying.  But what's more interesting than one of several instances of Cann beating a charge is what led up to Mr. Liggett's killing.  What's undisputed is that Liggett had recently written about potential ties between Cann's criminal organization and the administration of DFL Governor Floyd B. Olson.  It's not hard to imagine how any number of individuals of shady repute might have been unhappy with airing this particular laundry, so the official line seems to be that dissatisfaction with being exposed was the motive.

But Karlen adds another interesting wrinkle.  According to his book, Liggett wasn't exactly a crusader for good government.  Instead, he allegedly made a living by selling hoods like Cann the opportunity not have their stories published in his paper.  Cann had apparently declined the opportunity, perhaps in disbelief that anyone would publish such allegations against the sitting governor and the local crime boss, no matter how true.  It seems that Liggett may have found out why Cann was so incredulous.

I'll leave you one last Cann-related image.  This time the excitement is the former location of Cann's headquarters, a club called Flame: 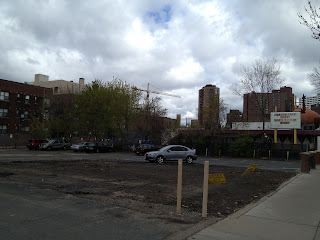 Yup, it's gone now. UPDATE: Okay, it looks like I got the address wrong. The building is apparently still there, and that empty lot is not where it once was. Dang.

Here's the marquee from an undated Historical Society photo: And here' the exterior of the building in a later incarnation in 1949 (also from the Historical Society):

Email ThisBlogThis!Share to TwitterShare to FacebookShare to Pinterest
Labels: history

Foreign Lands: A Pair of Mysteries 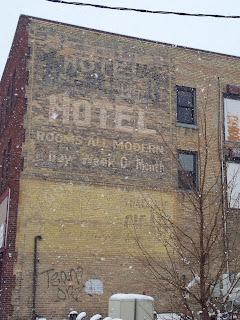 It's been awhile, but I had reason to travel all the way up to Bemidji, MN this weekend and came across a few news signs, so I figured I was overdue for a post.  This two-for-one is the best of them.

Unfortunately there isn't much identifying information on the top sign.  It's pretty clear that this building was once a hotel, which would have had a pretty good location near the center of the old downtown and near what looks to be the old passenger train depot, but aside from noting the modern rooms available by the day, week or month, it's hard to do any research without some type of ID.  Strolling around the front of the building suggests that it is now the Summit Square Apartments. Perhaps on a day with better/different weather (it was snowing on April 6), it would be possible to make out more of the sign.

Meanwhile, you might find the one on the bottom a bit hard to read.  "Cigar" should be legible, but you'll have to take my word for it that to the right of that the brand is advertised as "V-B."  You'd think that it wouldn't be hard to find some information on the internet about a tobacco brand, but I'm not coming up with much.  An outfit called Farmer's Tobacco seems to have a VB brand of cigarettes, but that company doesn't seem to have a history old enough to be the subject of this sign.  I'm officially stumped.