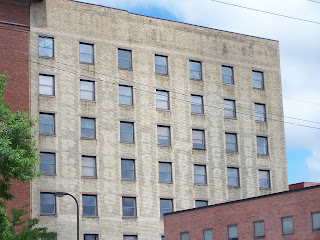 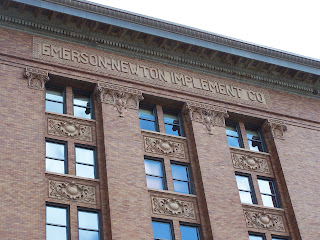 We have some pretty cool-looking stone work, providing a longer-lasting, readable reminder for what the side used to say in paint. And if that's not cool enough for you, check out the front entryway: 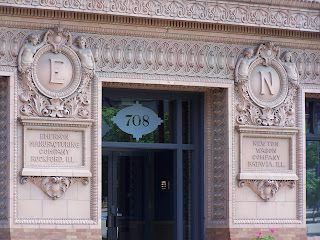 So, all this screams, "hey, there used to be a lot of money in this business" to me. It's part of my my agricultural series, and a reminder of how this region made its mark (well, its second mark) off the region's farms.
Emerson Newton, of Batavia, IL, as you can see, built this building in 1904, and, along with its neighbor (coming soon), is on the national register of historic places. Unfortunately, I've got a lot more on the building than on the company.
The historical society has a number of old images, from 1906, 1974 (with a United Warehouse painted on the side, oddly enough), and 1966, with an Allis-Chalmers sign visible on the side. It's not particularly relevant, but it has renewed significance for me because grandfather used to have a farm implement business in Clear Lake, WI. He died years ago, but I learned just last week, at his brother's funeral (just a few days short of 99), he sold Allis Chalmers machinery. So, basically, this means that these guys are sort of the competition, and, therefore, sort of evil.
Posted by Adam at 9:41 PM No comments: 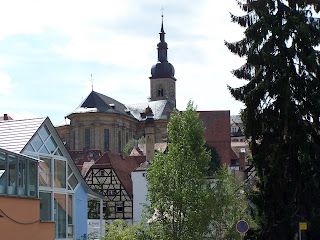 Here's another one from my recent vacation. Let me begin with a warning that this post is not even remotely factual. As someone who is largely ignorant of the culture and history of Germany, I'm making this stuff up, people.
So, now that I've appropriately wet the blanket, this shot is from Bamberg, in the northern part of Bavaria. I've been to Germany a number of times, but this one was a new stop, and well worth the visit for its Rathaus perched amid the river in prime position to collect tolls.
We arrived in town after a fairly healthy drive from Berlin, which meant that the older members of the party went in immediate search of a restroom. Having found one in the tourist information office, I also stumbled upon this smokestack labelled "HB." And here's where we get speculative. For all I know, "HB" means "baker" or "factory" or something general in German. But to me, those two letters mean beer, as featured in the logo of the Hofbrau, of Hofbrauhaus in Munich. So I'm going with that.
Posted by Adam at 9:20 PM No comments: 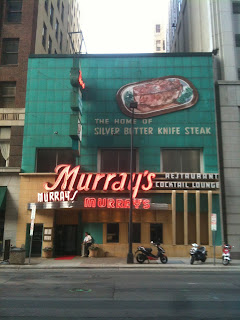 It's post #80, which means I need a landmark, but I'm not sure I've got anything that qualifies. Nonetheless, I'll stretch a little (like the Vikings picking Christian Ponder with the twelfth pick), and use the authentic 1940s styled signs of Murray's. It kind of looks like something from 2005 that is trying for an old-fashioned look, but this is the real deal.
I've never been, and I try not to eat red meat, but this is a place I have been hearing about since I was a little kid. Every Sunday morning I'd wake up to my dad listening to WCCO's Sports Huddle with Sidd and Dave, which has been bestowing Murray's silver butterknife steaks on guests for as long as I can remember. And all of a sudden I'm hungry.
Posted by Adam at 6:30 PM No comments:

Presumably Not Hand-Stolen In Stepney 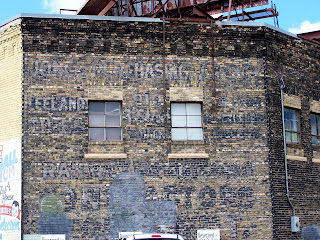 The Vikings stadium saga is in the news again, so let's head back to the Metrodome neighborhood. This one is in the immediate vicinity of the hide and pelt dealer and the roller company. It looks to me like there are multiple layers of signs here, but they are rather hard to make out.
Most legible to me is "Jones Purchasing Agency" at the top of the sign. The Downtown Journal, having beaten me to the ghost hunting punch by more than a few years, mentions this particular sign but doesn't give any history. Sadly, I've not got too much else either, but the intervening years mean I get to take advantage of Google Books. And the company whose stated mission is to organize all the world's information has something for me. It seems that city records show that the agency proposed to provide a cement mixer to the city in Feb., 1911. So I guess they sold stuff. Who knew?
As long as I can remember, this has been a store selling sports souvenirs. I've never been in, but I'd always wondered how much business they actually get. Do people really cross the street from the dome to pick up a t-shirt? I guess I'm just not the type who buys a lots of commemorative crap...er.. I mean gear.
Explanation of the title here.
Posted by Adam at 5:30 PM No comments: 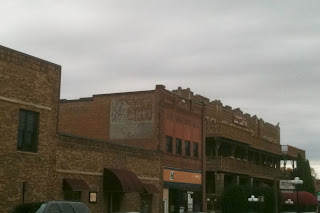 I snapped this sign after stopping for decidedly mediocre "Italian" lunch during this weekend's road trip. It's just off the main drag in Alexandria, MN, not far from the town's antique shopping district, the stores of which have that strange, nausea inducing quality common to rooms full of old stuff. I've got little to say about the sign itself, except that it seems to say "Meat Market" and is on the side of a now-closed lunch place. And yes, I'm man enough to admit to a bit of weekend antique shopping (in my defense, it was unplanned and not my idea).

And I've got a three-picture update to my florist post. Turns out the front of the building is well-labeled too. 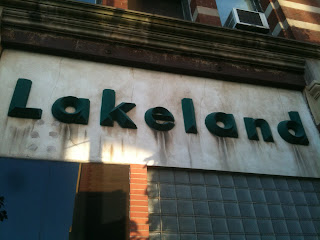 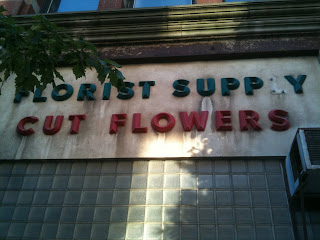 But apparently there used to be something else here too. The company is gone now, but the sign for Acorn, Inc. isn't. Do you think Michele Bachmann is personally responsible for them being defunct? (No, it's not that ACORN, probably something more like this) 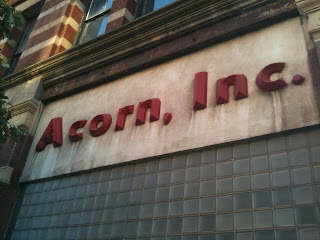