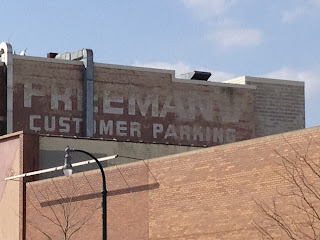 There is no word whether the proprietors are related to Hennepin County Attorney (and former gubernatorial candidate) Mike Freeman, or his father, former Minnesota governor and U.S. Secretary of Agriculture, Orville Freeman.
Posted by Adam at 6:48 PM 1 comment: 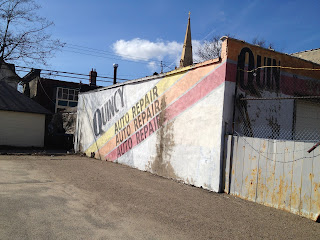 I like this sign, because we're clearly not looking at something from the 1890s here.  Check out those colors.  Check out the graphic design.  That's gotta be the 1970s, right?

You'll not be surprised that an auto repair shop that dates to the latter parts of the 20th century, which looks to have been long closed, does not have a large internet footprint.  That means I can't tell you much about this, so I'll keep it brief.  The Interwebs have documented it at least twice before.

This post brought to you in honor of Art-A-Whirl, which is currently taking place in the Nordeast Arts District, including right next door, I think.
Posted by Adam at 10:12 AM No comments:

Local Tip: Stay Away From Vulcans 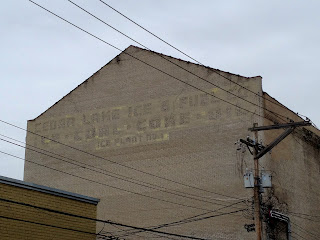 Cedar Lake Ice & Fuel Co. has been blogged before.  Our blogging friend seems to have done the internet research back in 2008, so I'm going to keep this brief.  I'm not exactly sure why, but apparently Hidden Beach, a formerly nude beach on Cedar Lake is involved, so how could I not mention it?'

I've not got a ton on the company itself, but they seem to have dealt in ice, coke, coal and oil.  Presumably they helped you keep your house warm in the winter and your custard cold in the ice box year-round.  The Strib pulled together an awesome collection of photos from 1947 of the harvesting of ice on Cedar Lake not too long ago.  I would guess it's this company doing the harvesting, but it doesn't explicitly say.  That post links to even older coverage from 1890.  Click both links and check out the really cool, and cold, old pictures.

This building is on Nicollet between 25th and 26th, on what locals like to call "Eat Street," and now houses Vertical Endeavors, where you can go rock climbing.

Here's another shot of the sign from Flickr.  The local press was/is on top of redevelopment efforts.
Posted by Adam at 9:14 PM No comments:

Long, But Probably Not Winding 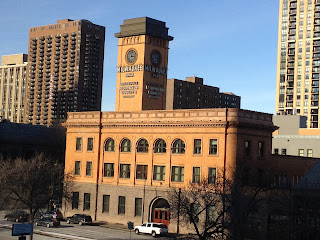 It's post #110, so that means it's landmark time.  As seems to be a pattern, we're straying a bit from from paint-on-brick advertising to get one.  This one's full name is  the Chicago, Milwaukee, St. Paul and Pacific Depot Freight House and Train Station. Or at least that used to be it's official name, after the railroads that used it.  Anyway, I've never heard anyone call it anything except the Milwaukee Road Depot, or just the Depot.

Trains rumbled to a stop at this spot dating back to the old Minnesota Central railroad in the mid-1860s.  According to Wikipedia, the "first depot" was built here in 1879, Italianate style.  I'm not sure whether that means that for the roughly 13 years prior existence folks just had jump off the moving train as it went by, or if it means the line was only extended to here a little more than a decade before it's start.

Anyway, that original depot was torn down and replaced with the current one in 1899.
Perhaps you've not heard, but passenger rail had a bit of a decline, and freight rain struggled and consolidated elsewhere.  The Deport stopped functioning in that capacity in 1971 and sat vacant for a long time as folks tried to figure out what to do with it.

The city bought the property in the early 1990s, as described in this wonderful old report from WCCO TV.  As the mustachioed gentleman predicted in his interview, the place was used as a home for the Minneapolis Farmers Market before being renovated in earnest.  Today the old depot is a hotel (you can see the word Renaissance below the original signage if you look closely) and the old train shed, still among the longest survivors of it's kind, is an indoor ice rink.    .

For a bit of 1950s jingle fun, check out this song written for Milwaukee Road's 100 birthday.  You'll not be surprised that the Historical Society has quite a few images.  I'll just point out out a few.  In 1948, there were different signs for different railroads.  The trains of 1950 were a bit steamy and maybe wet.  I would not have wanted to work in the yard in the winter in 1951, and definitely not in icy 1952, or any time for that matter.  You can see one of our previously featured landmarks in the background of this shot of a derailed passenger train in 1953. Despite all the steam, snow and derailment, this fashionable duo in 1954 seem downright enthusiastic about arriving.

Finally, you might recognize the apartment building in the background from it's appearance as Charlize Theron's Minneapolis home in dark comedy, Young Adult.
Posted by Adam at 10:41 AM No comments:

Email ThisBlogThis!Share to TwitterShare to FacebookShare to Pinterest
Labels: landmark, railroad
Newer Posts Older Posts Home
Subscribe to: Posts (Atom)
See a map of all the signs here. Follow me on twitter at @ajm6792