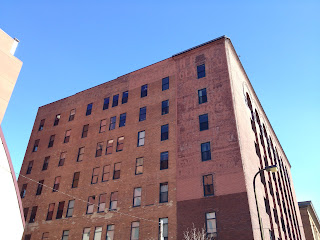 I'm afraid, dear reader, that I've utterly failed you.  That "glass and plow" building I just recently talked about?  Yeah, well, I got it wrong.  And now I'm compounding the error by giving you shot in which you can't read it anyway (but it's better than the blurry, poorly-lit shot of the whole sign I was originally going to use).  The horror.

But it turns out that it wasn't "rch."  It was "rgh," as in, "Pittsburgh" and as in "Pittsburgh Plate Glass Co."  And the building with that name has a story to tell (and its own Facebook page).  It's also called the "Northern Implement Company," thus explaining why it says "plow" on the side.  I'm guessing PPG, short for Pittsburgh Plate Glass, is the successor company, which seems to be going strong.  If so, it seems they no longer have local operations.  The rather generically-named implement company is hard to investigate, as its main presence on the internet is pointers to this building.

The Historical Society has a bunch of interesting images.  Here's the leaded glass department at the very beginning of the 20th Century.  It doesn't look that much different a decade later.  Finally, here's the outside of the building, and the cobblestone street, another decade after that, or another, or in the 1970s.

In news of other failures, I also can't believe that I told you the story of Wilbur Foshay without checking on what's available from the Historical Society.  Not surprisingly, there are tons of pictures featuring this Twin Cities landmark.  Go look at all of them.  I'll just highlight a few: 1926 before there was a tower, excavation for the tower in 1927, the Foshay football team in 1928 with the Tower on their uniforms, the skyline during construction, brand-spanking new tower the same year, the dedication ceremony in 1929 featuring "scantily" clad women, and the auction of the building in 1930.  And, of course, things would not be complete with out shots of Wilbur himself before the trouble, at the time of arraignment, at trial, and in Leavenworth prison working on a pardon while wearing a shirt, tie and cuff links.

Finally, in failures past, perhaps you remember the "Witt's" saga.  It turns out that if I had walked through the alley behind it, I might have been able to make out this very dilapitated sign and known what I was looking at: 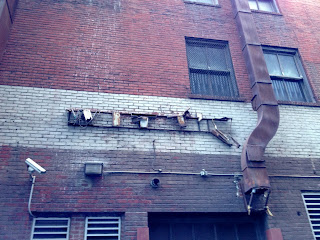 They Could Make A Movie (Probably Called "Madison") 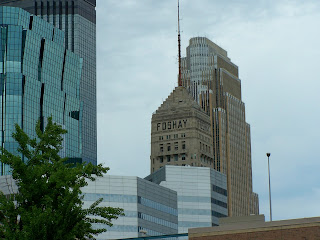 Try control your excitement, people.  I know you never believed we'd get here.  I know this blog has exceeded your expectations in every way, and now, well, now we've finally made it.  That's right.  We made it to post #100.  Who knew there were that many signs to talk about?

So, as it's a nice, round number, we need a landmark.  I've saved a good one.  Okay, so it's not paint on brick, so maybe it doesn't fit exactly (hmm... maybe that says something about how we got here), but it is significant.  It's the building that defined the Minneapolis skyline for years.  If memory serves, it was long the tallest building in Minneapolis.

The Foshay has a bit of a dramatic history.  It was completed in 1929 just a few months before the big stock market crash.  It was the brainchild of Wilbur Foshay, who got rich buying utility companies and planned to move into a multi-level suite at the top of the building.  The building opened to a lavish dedication and featured John Phillip Sousa conducting a specially-commissioned march.  Each guest got a gold watch.  Splendor abounded.

There was only one problem.  Old Wilbur had a secret and, like Bernie Madoff, the onset of the Great Depression exposed him.  His empire collapsed, he never moved into his new home, and the check he used to pay Sousa bounced.  Wilbur was accused of running a Ponzi scheme and charged with fraud.  His first trial ended in a mistrial after one juror, Genevieve Clark, held out for his innocence.  He was convicted and sentenced to 15 years the second time around.

Only later was it discovered the Mrs. Clark's husband knew and had business dealings with Wilbur.  Rather than face obstruction of justice charges, she and her family fled.  The Clarks and their two children were later found dead from intentional carbon monoxide poisoning.

Things are a bit happier in the Foshay these days.  The tower is taken up by the W Hotel and the two-story commercial space at the base houses Manny's, arguably the best steakhouse in town, and Key's, one of the better places for brunch and/or pie.

Even more fitting, the Foshay is framed here by the IDS Center, which replaced it as the tallest building in town in 1972 and the Well Fargo Center (originally, the Norwest Center, and before that the one with the weather ball), built to be technically just shorter than IDS out of Minnesota nice or something.
Posted by Adam at 5:16 PM No comments: 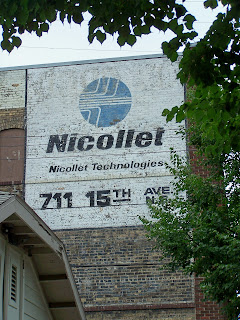 I'll leave it to you to figure out where this one is.  Have you found it yet?  I knew you could.  You are so smart!

Okay, so, this building has two generations of ghosts, and both seem to be actual ghosts in that at least when I went buy, the place was empty and shuttered.  Up top there you can see it says "Nicollet Technologies."  Given that Joseph Nicollet was French, I assume the technologies his people manufactured here were cheese, wine, and surrendering. (I kid, my French friends!  I know all about the bravery of the intrepid French soldier.  Unless he's had too much wine, of course).

Okay, so that was obvious crap, and Joseph Nicollet wasn't involved.  But that logo just screams, "1980s technology company" so let's see what we can find.  Maybe they made mapping software or something.

Well, look at that.  They make equipment for testing phone lines and were founded in, who woulda guessed, 1986. The company's still around, but apparently they've moved on up to the suburbs, Bloomington, to be specific.  Please judge them accordingly.

So let's stroll around the other side and  check out the other one: 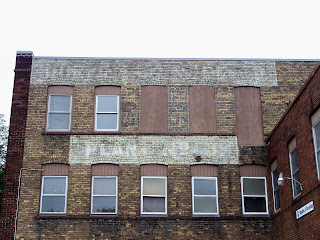 It's the famous Plant No. 8, and that tantalizing sign above it.  It's so close to being legible that it's painful.  But I don't know what it says.  As will become increasingly clear, this seems to be the neighborhood of ambiguous signs (stick around for more).

And with that, my friends, I've gone away.
Posted by Adam at 7:30 AM No comments: 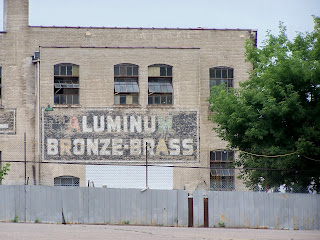 Some of my favorite signs are from businesses that used to work with metal.  I'm sure there are important differences between what these people do or used to do, but it's all metal to me, baby, so I'm lumping them together.

So, in what is becoming a bit of a pattern, we've got some pretty generic words painted on the side of a wall without much other identifying information (maybe now you know why I've been sitting on these for awhile -- look at those green leaves!).  I'm pretty sure you could get aluminum and bronze-brass from these people, but I really wish they'd just put their last name or something up there too.

I had brief hope for a clue from this shot: 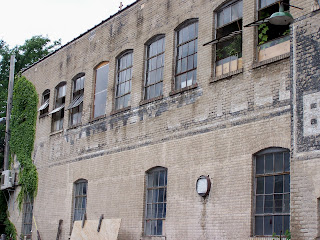 But after studying it, I think it just says, "Ornamental Iron & Steel."  Sorry, no luck.

The building is part of the Nordeast "Arts District" in a largely defunct old industrial area by the railroad tracks.  It's now called the Q.arma Building and houses Altered Esthetics, an arts advocacy organization.  It's at 1224 Quincy St. N.E.
Posted by Adam at 12:05 PM No comments: 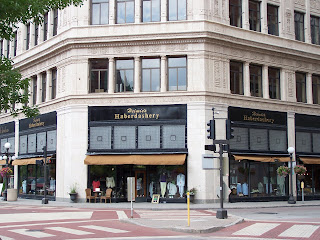 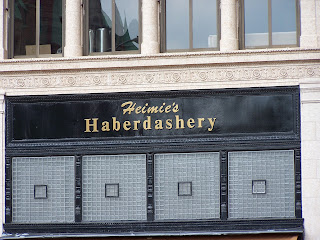 Okay, so it's not a really a ghost and it's not really paint on brick.  But still.  How could I not?  It makes me wonder about our local community.  Is it good that we take ownership of potentially offensive terms?  Or is a bad that we use them?

Anyone have some lefse?
Posted by Adam at 9:41 PM 2 comments: 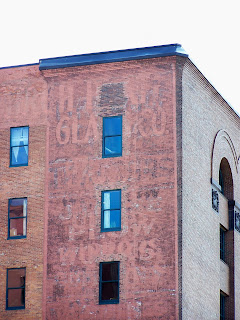 This is a tough one.  It's clear enough that I can make out "Glass Co." and "Mirrors" but also "Plow."  My guess is that strange pairing means more than one generation of sign, but let's see what we can find out.

Well, unfortunately, not much.  There are a lot of glass companies out there, and "*rch" isn't really helping me.  It could be Burch Glass Company, but they seem to be in Texas.  Maybe we should ignore the glass and focus on the plow.  Could it be Burch Manufacturing Company?  Even though their web page mentions Minneapolis and farm equipment I don't understand, it doesn't look like they make plows and they are in Iowa.