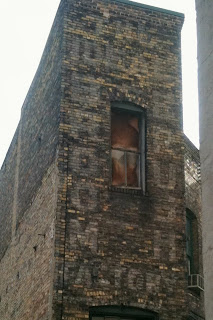 There's little left to be found about the The Ideal Broom & Brush Factory, in the alley between 1st & 2nd Avenues and 3rd & 4th St. Even the building itself seems to be completely abandoned. The front of the building has a faded awning that says, "The New French Bar" that definitely doesn't look, well, new.

Aside from a few Flickr photos (one of which tempts me to steal a line about Dickensian street urchins), I don't know much about this company or from where in the mists of time this comes to us. Instead I will give you a two cool Historical Society photos of a fire and its aftermath in 1937 at the Ideal Laundry that was a few blocks away, which had a cool sign of its own at the time.
Posted by Adam at 7:44 AM