Think Up Your Own Lame Double Entendre, Please 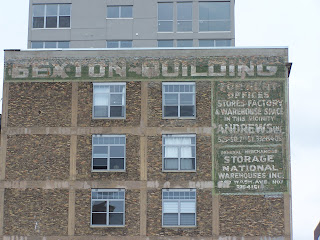 It's been awhile since we had a legit post around here (yes, I'm looking at you and you), so I went back into my photo archive and found a real honest-to-goodness, Minneapolis, paint-on-brick, from back in the day, aging-but-preserved ghost sign for you.  You can thank me later.

The signs, for stores, factory, storage and warehouse space, may tell us something about the industrial history of the building, or it could just be Andrews Inc advertising for what they can offer nearby.  But regardless, this was once a commercial building downtown, so it must still be in commercial use, right?  No, of course not, silly.  It's "lofts" now!  What could be better? 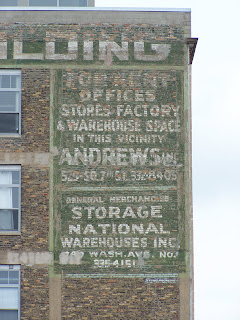 Well, for the Sexton, perhaps lots of things could have been better.  It seems to have had rather a rough conversion into hip, urban living space.  Everyone involved seems to have sued each other, and residents were apparently promised a parking ramp (that's garage, if you don't speak Minnesotan) that never materialized.  I could probably make this whole post out of the saga of the Sexton suits, but that seems snore-inducing, so I'm going to write about other stuff after this next picture: 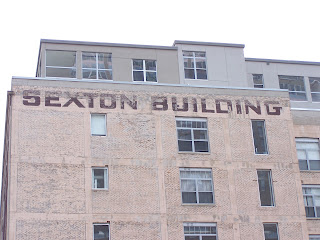 So, as I often do, I've tried to find some of the actual history on the building, before its troubled condo conversion, but I've not found a lot.  This guy seemed to promise to tell me something about it, but when you strip out the stuff from 2007 & 2008, he really just says it was an old warehouse.  Yeah, we knew that.

Here's what I've got for actual history: a photo of the building looking sharp in 1924, another showing cobbled streets in front from the next year, and two from 1938 inside the building depicting what's described as a "hospital admissions project."  At least these tell us something about the age of the building.  Now.  Are you ready for a tangent or two?

I knew you were.  Okay.  So having found little about the building itself, I got curious about its namesake.  There must have been someone named Sexton around, right? It seems there were at least two fellows with that name who popped up right away in my searches.  The first is a true Twin Cities old timer.  Gus Sexton was lumberjack and logging camp operator along the St. Croix dating back to the 1870s who seemed to get his picture taken fairly regularly.  He also seems to have given money for a pipe organ at St. Michael's church and owned property in Stillwater.  Unfortunately, we all know the good citizen's of Minneapolis wouldn't allow a foreigner from the east side of the river to own a building on our glorious soil, so Gus probably isn't our guy.

A more likely suspect might be this fellow, Charles W. Sexton, pictured in 1919.  It seems he was in the insurance game, if he's the guy mentioned in Best's Insurance Reports in 1922, but it also seems that he didn't live terribly long after that picture was taken, as Best's says he was deceased at the time of its report.  William Gray Purcell seems to have written to his company to make a claim in 1915.  He was apparently also a lawyer and his daughter seems to have married a lawyer, so maybe it's best not to speak of him anymore. 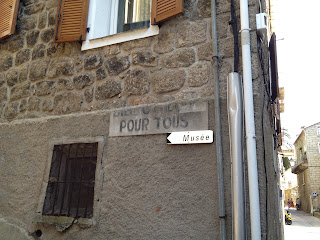 So I seem to be stuck in a rut of short, not-terribly-informative posts.  But it's been awhile so I wanted to get something up.  Also, I recently got back from vacation, and certain people wanted foreign signs, so here you go.

This one is in Sartene, Corsica.  The town's great.  Go.  Visit.  It's cool.  This is where "vendetta" comes from.  In the tiny warrens of windy streets, you don't want to make an enemy.

Otherwise, while the trip was really great, and the island really beautiful, there wasn't much for paint-on-brick advertising.  We ended the trip in Paris, where there were certainly some possible ghost signs, but we had so little time there that I couldn't justify spending time wandering the fading industrial parts.

So we're stuck with a just a former library.  I don't know how old it is.  All I know about it is that it's for you: 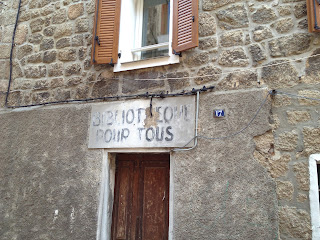 Email ThisBlogThis!Share to TwitterShare to FacebookShare to Pinterest
Labels: Foreign Lands, Library
Newer Posts Older Posts Home
Subscribe to: Posts (Atom)
See a map of all the signs here. Follow me on twitter at @ajm6792