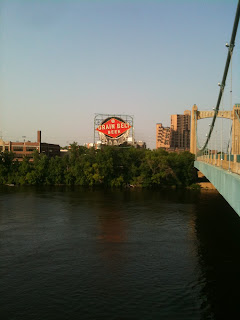 I wanted something special for the 20th sign, the second full page of posts, so I decided to bend the rules a bit again (I'm The Decider, so I can do that) for a true Minneapolis icon. The Grain Belt beer sign has been flashing it hints of barley and hop goodness toward downtown from its perch on Nicollet Island for ages. It was apparently for sale and in ill repair a year and a half ago, and hasn't flashed as it's meant to for some time.

Before American brewing became concentrated in Milwaukee, St. Louis and Colorado (or who are we kidding, these days, South Africa, Belgium and Canada), Grain Belt was one of the regional brands that served the Upper Midwest. The brand dates to before Prohibition and today it seems the original yellow beer seems to be gaining PBR-like ironic popularity. Today it's owned by August Schell Brewing of New Ulm and the original brew is complimented by the deliciously darker Nordeast. The abandoned old brewery in Northeast Minneapolis is on the national register of historic places.
Posted by Adam at 11:19 PM