Foreign Lands: How Much for that Tomato? 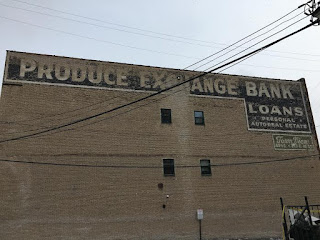 I had a few minutes to spare in the general vicinity of downtown St. Paul, so I went on by to check out the Penfield. Because at the frequency at which I visit downtown St. Paul, it's still something "new" over across the river. At the risk of going a little fanboy (young people still say that, right?), it was great and if I had reason to live abroad in foreign lands, it would be a great place to live. There's a beautiful grocery store right in the building and craft beer and good pizza right across the street.

This sign, which reads, "Produce Exchange Bank" and offers residential, auto and real estate loans, is on the side of the Produce Exchange Building. The building apparently dates to 1915 and presumably was the home of the bank. Its seems there used to be a large market next door, and the building was turned into lofts in 2004.

A newspaper called the Chicago Packer reported in December of 1927 that the bank was temporarily closed by state authorities investigating whether its funds were used by the bank's Executive Vice President to dispose of stolen bonds. The bank was involved in a 1942 Minnesota Supreme Court usury case, the facts of which sound a little interesting (there shouldn't be a question whether you borrowed money from the bank or it's president personally), so its seems that the Chicago Packer's concern for the hardship on the city's produce traders should the bank never reopen was premature.

Santo Speranza was the bank president in 1942, and it seems the Speranza family continued with the  bank for some time. Indeed, there's a scholarship at St. Kate's endowed by Mildred Speranza who was president of the bank from 1960-1980. According to the announcement for that stipend, it was a "family bank [that] helped Italian immigrants in the early 20th century secure funding to buy homes and start businesses" and she was one of the first women bank presidents.

Turns out there are interesting stories in the city's past. Who knew?

Here's another shot from flickr, Apparently you can live there. Here's the building sometime before 1920.
Posted by Adam at 3:50 PM 1 comment:

Email ThisBlogThis!Share to TwitterShare to FacebookShare to Pinterest
Labels: Bank, St. Paul
Newer Posts Older Posts Home
Subscribe to: Posts (Atom)
See a map of all the signs here. Follow me on twitter at @ajm6792