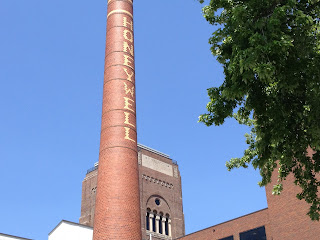 It's post #120, so that means we need a landmark.  As seems to be a developing pattern, I don't have paint on brick for one, but I do have one that visitors to town are likely to see.  In fact, I've been seeing this one while driving north on 35W toward downtown for years.  And yet it retained some amount of mystery because despite being readily visible it's sort of in an out of the way neighborhood tucked in next to the freeway.

So, one day, I went looking for it.  From the highway, you can see the clearly-marked smokestack above, but you can also see the big "Wells Fargo Home Mortgage" sign on the neighboring office building.  I thought that meant that the two companies existed in close proximity, but I was wrong.  This is no longer a Honeywell facility.  It just says that on the sign.  So, I guess that means it's a legit ghost.

Honeywell is one of those company's that, if you grew up in the Twin Cities, you had friends whose parents worked there.  It's a step beyond household name.  So much so that I always thought my former colleagues helping to prevent the GE/Honeywell merger awhile back meant that it would remain a Minnesota-based company.  But it seems I'm wrong and the company has its headquarters in Morristown, New Jersey.  It seems a 1999 merger already moved it away.

Nonetheless, the next shot gives us a glimpse into its real origins: 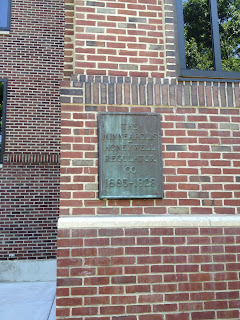 In case you can't read it, the sign says "The Minneapolis Honeywell Regulator Co., 1885-1928."  The company's history starts with a man named Albert Butz inventing a means of regulating the temperature of a coal furnace in 1885.  The precursor of the thermostat was born.  The company didn't get the disappointingly vague, yet geographically specific name of Minneapolis Heat Regulator (see below) until 1898, when the appropriately named R.W. Sweatt bought and renamed it.  A merger with Mark Honeywell's company in 1927 led to the name in the sign above.

You can't really read it, a the sun wasn't cooperating with my photography, but the top of the tower below says, "Minneapolis Heat Regulator." 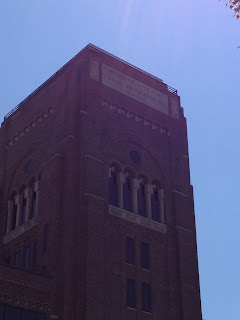