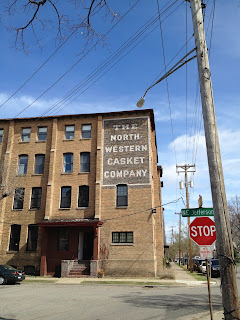 It's been awhile, but we are back, and we're off in Nordeast again.  I went for a bike ride, and boy was a rewarded.  This is near the old railroad tracks in the "Arts District" again, but this qualifies as a both a cool old sign and a cool old building (see the shot below for the loading dock).  And there are stiffs involved.

The Northwestern Casket Company made... wait for it... boxes in which to intern dead people.  It seems the business is still around, but no longer at this location.  Go check out the history section of their website.  It's got some cool old pictures.  They apparently occupied this location until 2006 when they moved to New Hope.  (No, non-Minnesotans, that's not a Star Wars movie, it's a suburban city).  It was incorporated in mid-1882 and received supplies right off the railroad line and turned them into the most solemn of products. Sadly, they are not accredited by the BBB. 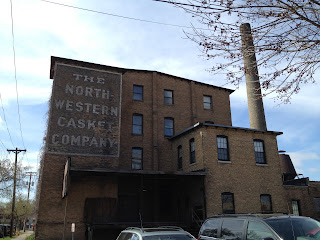