I Thought This Would Be Easier 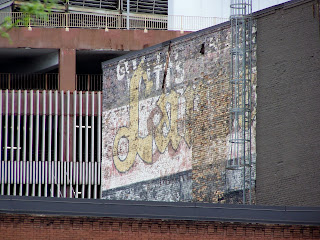 But I can't really make out what this one says either. Once again, it looks like maybe it's been painted over or modified over time. It looks like the top of the signs says "Witts," which may be an add for Witts Liquor around the corner (I'll have to go by to see if it's still there). It looks like it may now be Team Liquor (watch out for sounds).

I can only make out "Lan" at the beginning of the word superimposed over that, so I don't know to what that refers.

This one is at 705 S. Hennepin, directly above the Chevy's (the roof of Chevy's is at the bottom of the picture).
Posted by Adam at 11:25 PM