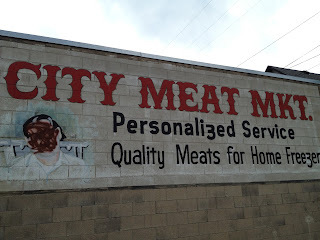 Who's ready to party?  Huh?  Let's get your groove on.  Move your body.  Shake your booty and get them digits!  It's a meat market, baby!

Okay, so it's not that kind of meat market.  Or if it is, I'm confused why you would need your home freezer.  I mean, if that's you and your honey's thing, who am I to judge?  Just don't got all Dahmer or Bernie on me.

Here's a video of a guy saying this was a famous meat market in the 1970s.  You can tell in that video that it's already closed as of a year ago.  I had hopes that our friend would tell us more about it, but apparently to him the main item of note is that there were Vikings (no, not the plundering kind) who used to patronize the joint and leave their pictures behind.

You can also see in that video that there's a handwritten sign saying Jimmy has moved.  I don't know if that's Jimmy up there with his face covered in brown spray paint, but apparently there was once a guy who worked here who was popular enough that someone thought folks might follow him.
Posted by Adam at 8:25 AM 1 comment:

Email ThisBlogThis!Share to TwitterShare to FacebookShare to Pinterest
Labels: Foreign Lands, meat
Newer Posts Older Posts Home
Subscribe to: Posts (Atom)
See a map of all the signs here. Follow me on twitter at @ajm6792