Such A Lovely Place 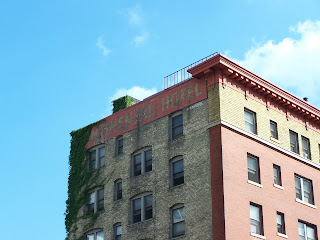 We're back in my neighborhood for the Continental Hotel. Built in 1910, and originally called the Ogden Apartment Hotel, it's on the national register of historic places. It was originally middle class housing, of a type popular with single men and women, that differed from a typical apartment by the lack of kitchen. It's name was changed in 1948, perhaps after the original owner, James Ogden was no longer in the picture.

Messrs. Norton & Peel snapped it at least twice, perhaps for this postcard from the 1950s. You can commemorate Gertrude's stay in 1968 by buying a used (okay "vintage") copy here. In addition to enjoying her note to Ann of Racine, you can read the back of the card and learn that it billed itself as fireproof (probably means I'll find photos of a fire somewhere) and at the time offered daily and weekly rates. The daily rates were apparently no longer available by the time the famous photographer and filmmaker Robert Frank tried to stop in.