Foreign Lands: Its Own Juvenile Joke 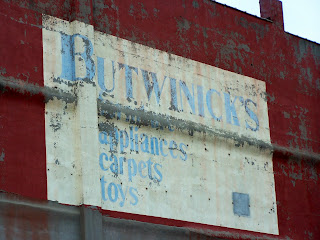 I still have a backlog of Minneapolis signs, and many neighborhoods left to explore, but some day those resources will be exhausted, and it's fun to explore other places too, so I'm going to occasionally bring you signs from foreign lands. This one is truly exotic, from strange and alien confines of downtown St. Paul. If any of you are ever brave enough to venture there yourselves, come prepared, it's truly the wild, um, east.

I remember radio ads for Butwinick's from my childhood. As you can imagine, it's a name that a tween would remember. I'm surprised I've not found more about the store's history on the internet, but Writing On The Wall says it was in operation from the '30s to the '90s. I'm guessing that its closure was just before everything started getting documented digitally on the web. Apparently a scion of the family now owns a mattress store.

From the Historical Society's photo archives we learn that Butwinick's store had a fire in 1949, which led to a big sale that drew a big crowd. And here's another shot from Flickr.

The sign's on the corner of 7th and Sibley, which looks like it's actually a few doors down from the original store.
Posted by Adam at 2:05 PM