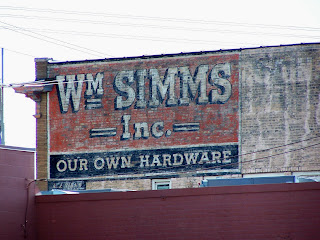 We are in Dinkytown for the first time, with this sign for William Simms Hardware. It's not actually been a hardware store for some time, but I haven't been able to find when it started or stopped functioning in that capacity. I lived not too far away for a couple of years while in college in the late 1990s, so I know the fun ended some time before that. I don't know whether Our Own Hardware was the chain of stores or a franchiser or cooperative, but it was sold out of existence in 1997.

As for origins, Mr. Simms was to be a member of the entertainment committees for the the 1915 National Retail Hardware Convention at the St. Paul Hotel, so it goes back at least to then. Apparently he lived quite close to work (how green of him), near 14th and Hennepin, at least as of 1922. Robert Simms, apparently a descendant of William, owned and operated the store before dying in Wisconsin at the age of 85 in 2003.

The store, on 14th Ave. SE, has been posted to Flickr a few times.

UPDATE:  Apparently I was wrong and it was still an operating hardware store when I lived in the neighborhood.  It closed in 2002.  My excuse is that one does not do many home improvement projects on the crumbling houses of the area that are rented pretty much exclusively to poor college students.
Posted by Adam at 7:52 AM