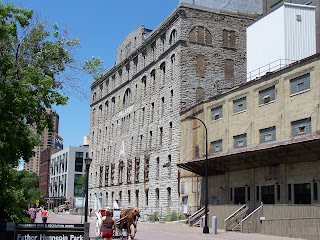 Completing our survey of Falls-adjacent flour mills, it's time for Pillsbury. Perhaps the most famous of the local milling names (thanks to the blandness of General Mills), the "A" mill has been in the news fairly recently after being named as one of the most endangered historic places. The mill was completed in 1881 and was the largest flour mill in the world for 40 years. It stopped operating in 2003 and has since been through the redevelopment wringer.
Unlike the Washburn A Mill, this one never exploded, although its design, by an architect rather than an engineer, had trouble standing up to the vibrations produced by its massive machinery, leaving the outer walls of the original mill building bowed out by 22 inches at the top.
I took several pictures I thought were worth posting, but once I got a shot with the horse-drawn carriage out front, how couldn't I put it up top? It's vaguely reminiscent of the horse drawn carts in front of the mill in this 1884 postcard. 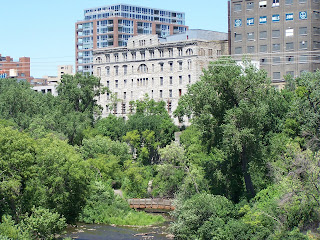 Not surprisingly, there are many old images available from the Historical Society. This one, showing a train preparing to leave from the center of the complex, makes me think that someone should do a comparison showing what things look like today. Hmm. Perhaps I have a new project idea.
Finally, I'd highlight this one, from around the turn of the 20th century, showing a smaller mill complex as well as the water flowing on the riverbank below the mill. If I was more familiar with mill terminology, I could probably describe it more accurately, but I'd bet the water there has already been through the waterwheels.
I'll leave you with one last shot, taken from across the river and showing the stone arch bridge and a bit more of the surrounding context: 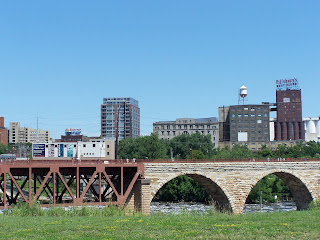