We've Been Over This Before 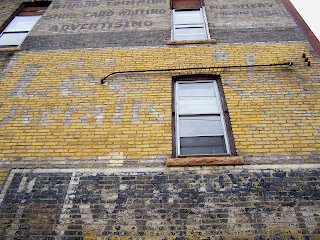 I've got three signs on the side of one building in an alley off Lake Street of varying degrees of legibility.  The first one we can make out, and in part because we've seen that yellow-hewed ad style before.  It's Lee's, but this time it's not just overalls.  This one seems to be co-sponsored by something called Jack's Toggery.

If you're like me, you weren't so sure about that second word.  It sort of sounds like British legal term/slang for alternative sexual behavior.  But I guess maybe it used to mean clothing store in the vernacular.  Somehow, that's disappointing.  So is what I've been able to find about Jack's.  I'd guess there was a clothing store by that name in this area, but I've not been able to turn up any evidence, so, on to the others: 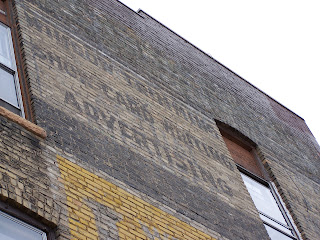 For the next one, we know what they do, but we're missing the name.  Apparently someone around here offered window trimming, show card writing and advertising.  My first thought was that this was a another decorating outfit, but I think that's wrong.  I think these folks were instead marketers.  Maybe they were the original Mad Men.  Sadly, if they wrote their own name on the side of this building, I can no longer read it. 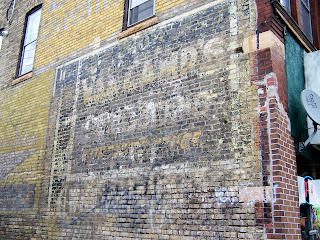 The last one leaves us with the opposite problem.  I think that first line says "Van Camp's."  I can't read the rest, but it seems there is a famous brand of canned beans with that name owned by ConAgra.  I don't think I've heard of them, but that has to be what we are looking at.  Apparently I don't eat enough canned beans.  I've seen Blazing Saddles, so I do not regret it.

The brand dates to 1861 in Indianapolis, and there's a pretty cool collection of Van Camp ads from the period when they were owned by a company called Stokely here.  Local Google results for the last name seem to be dominated by doctors with that last name.   Do you think any of them focus on the gastrointestinal system?

Just for good measure, here's a guy named Van Camp hoisting anchor with some friends somewhere in Minnesota in 1941.
Posted by Adam at 6:14 PM