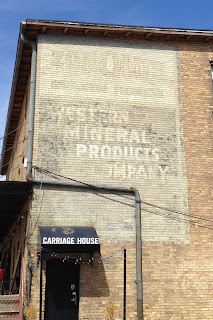 I didn't know it at the time, but apparently I should have refrained from breathing as I biked by this sign.  It's a little faded, but you should be able to read "Western Mineral Products Company" on the bottom.  That's gotta mean that they produce something wholesome like calcium to fortify your children's cereal or maybe delicious, pure mineral water.

Wait, what?  This building at 1720 Madison St. NE, back in the Nordeast Arts District, is a superfund site?  As it turns out, this building was a plant that turned "Libby Ore" from Montana into asbestos insulation from the late 1930s to the late 1980s by heating the ore until it "popped" into fluffy material suitable for insulation. Even better, they used to offer waste "rock" for free to the surrounding community, potentially creating a whole neighborhood of cancerous fun.  While it operated, at least 130,000 tons of the stuff was shipped by rail to this location. The product here was sold under the Zonolite brand, and may well still be in your house.  You'll not be surprised that all this resulted in at least one lawsuit.

The W.R. Grace Company bought this building in 1963.  According to them, they're still enriching lives to this day. The company actually originated in Peru in 1854, where it was founded by William Russel Grace, who fled the potato famine in Ireland.  One has to wonder if he knew what he was getting into.  The Grace company website still seems to have a product sheet for Zonolite, but I don't know if that means it's still available for purchase.

I once heard the "mesothelioma lawyer" was the most expensive ad term you could by from Google.  These folks were apparently a little more specific and decided to go directly for "Western Mineral Products."  I thank them for the background information.
Posted by Adam at 6:55 PM