Maybe The Sign Of The Unfriendly Host Would Be Funnier? 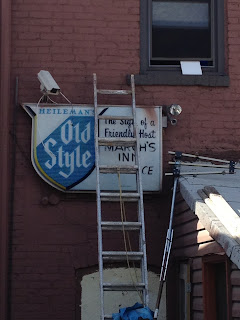 It's been awhile since we had a beer sign, so let's get back to it.  This one isn't particularly local, but it seems like there is something appropriate about a security camera keeping an eye on a step latter in front of a sign for a beer from Wisconsin.  I'm pretty sure someone dressed head-to-toe in red will come rushing by and trying to run off with the ladder at anytime.  They can use it to try to sneak into Camp Randall or something.  Better dead than red.  Friends don't let friends go to Madison.  All that sort of jazz.

This building, at 2913 Central Ave., apparently used to be bar or something, with this sign on the alley in the back.  Today it looks mostly abandoned, aside from its outdoor hardware storage.  If you peak between the rungs, you might be able to see that Heileman's Old Style is "The sign of a Friendly Host" at "March's Inn."  March's doesn't seem to have left much of a footprint on the internet, so I can't tell you much about it.

Which leaves us with Old Style.  As I mentioned, the brand's origins are in Wisconsin (death to Bucky!).  Those currently responsible for marketing the brand don't seem too interested in telling us anything about it (You're selling a brand like this and you're not playing up the nostalgia?  Really?)  The story takes us in the complicated history of American brewing.

Gottlieb Heileman emigrated from, surprisingly, Germany at some point in the mid-1800s, and made his way to La Crosse where he founded the brewing company that would ultimately bear his last name and first initial in 1858.  His son-in-law successor was in charge when they started making Old Style as their "premium" brand in 1905.  Later Russel Cleary (where there's a Cleary and a Gottlieb, can the Steen and Hamilton be far behind?) started a series of acquisition and consolidation in the 1970s and 80s , which ended up with the company controlling quite a few of the old line beer grands, including Grain Belt, before being taken over itself and passed around for awhile.  These days, Pabst controls both "Heileman's" and "Old Style."

Email ThisBlogThis!Share to TwitterShare to FacebookShare to Pinterest
Labels: Beer