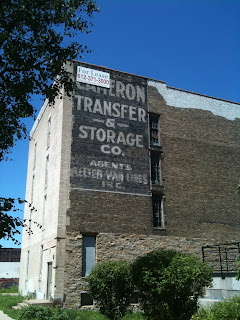 I feel like I've been straying from the mission a bit too much lately (what's up with all those foreign signs, eh?), so let's get back to it.  We're in Minneapolis again, and we have an honest-to-goodness ghost sign.  And as an added bonus, we get to see a little glimmer of summertime blue sky and green leaves.

This building is veritably wrapped in signage on all sides (see below), but I put the best one up top.  It's on the southeast side of the building, and under the "for lease" sign you can see that it says "Cameron Transfer & Storage Co." who were agents of Allied Van Lines (a brand now owned by Sirva, which brings up professional memories I will keep to myself).

It turns out that I found much more than I expected about this building and about Cameron.  It seems that Schafer Richardson has (or had) plans to redevelop the site and claims that the building was built in the early 1900s and is eligible for the National Register of historic places.

The company name seems to come from Carlisle Cameron, a Canadian-born businessman who took over what sounds like a carting business in here in 1884 and was still at it 42 years later.  It seems the company was active in something called the Central Warehouseman's Club in the early 1920s. Now that sounds like an antitrust problem waiting to happen. 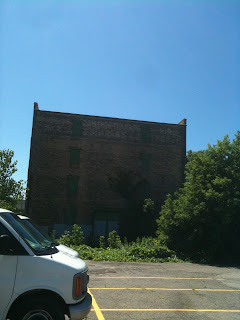 At least one other blog has shared the more generic signage on the opposite side of the building.  One has to wonder both how you make storage truly fire-proof, and just how rampant fires must have been at the time to make avoiding it such a popular point of advertising. 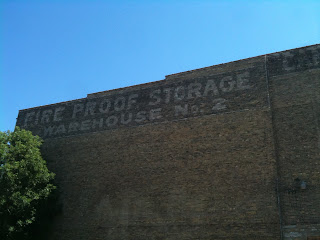 The business also shows up in a Minnesota Supreme Court decision from 1910.  It seems that someone made the foolish decision to remove their goods from the fire-safe premises of Mr. Cameron and lost them to a fire on a train.  Tsk, tsk.


Others have posted this building to Flickr here and here.
Posted by Adam at 8:39 AM