Foreign Lands: Money Is A Ball 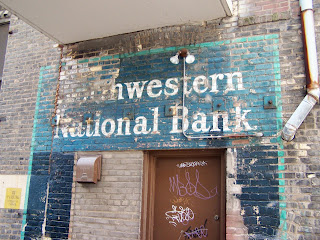 So my re-commitment to the mission didn't last long, but what can I say?  I went into my archive of backlogged Minneapolis signs and wasn't inspired, so it's back to strange and mysterious land of St. Paul.

Minnesotans of a certain age will remember Norwest, which was acquired by Wells Fargo in 1997.  Before there was a consolidated Norwest, Northwestern National Bank was the anchor of a multi-state bank affiliation that dated to the 1920s that helped its members survive the great depression.

I may be wrong, but in my memory Norwest was the first bank in the Twin Cities to offer free checking, which makes me remember it fondly (low bar for positive bank feelings, eh?).  The Norwest logo used to be a common site around town.

As to less common sites, Norwest's "weatherball" in downtown Minneapolis is too good not to include.  I don't have any memory of it, but apparently they had a 157 foot tower on the top of their headquarters, which was largest bank sign between Chicago and the west coast (do you think people stopped to see it after checking out the largest ball of twine?).  At the top was a color-changing ball that would give you a primitive weather forecast.  Minnesotans love a good weather prediction, so the ball grew in popularity until it became central to the bank's marketing (check him out lounging on the beach in the first link of this paragraph).  It was actually popular enough to prompt a local news report in 2007.

Alas, the ball went down with the rest of the bank's headquarters in a destructive fire on Thanksgiving day in 1982.