Look Elsewhere For The Stems And Resin 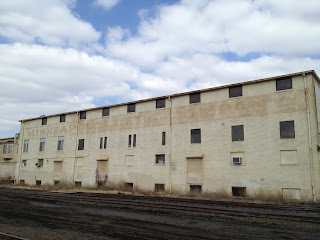 It's been a busy weekend here at the blog.  We've had to contend with a whole 3 page views in the last couple of days.  Apparently y'all are just way too excited about unknown printing companies.  Well, even though that didn't fire you up, this surely will.

We're off in the southeastern part of the city, right next to the railroad tracks along Hiawatha Ave. that parallel the river.  It's the land of light rail, grain elevators and related businesses, no small number of which seem to be crumbling and in decline.

In that vein, here we have the Minneapolis Seed Company.  It may not be fully legible in the photo, but it was pretty clear when I drove by again today, so take my word for it.  Despite being a bit generically named, the Historical Society has this interesting postcard from 1910.  It seems this is part of the Cargill empire (pdf) and the former Terminal Elevator Company, formed in 1904 and renamed in 1912 amid restructuring brought about by fiscal crisis at the company.

In November of 1920, officials of the company reported that country dealers were holding on to their seed rather than selling it in hope of higher prices.  Later that year, American Seedsman published some interesting images of the interior of the company.

Here's shot of the elevator, just to the left up the tracks in the photo above.  Stick around and I'll show you something quite similar from a bit farther to the southwest.
Posted by Adam at 10:38 PM