Someone Beat Me To It 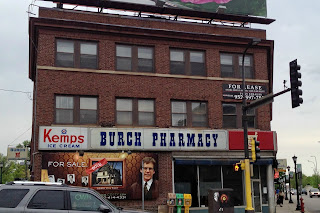 We seem to be on a mini-run of signs that aren't paint on brick but this one has been in the news recently, as the building is about to be put back into to use as an interesting new restaurant.  Which is good, because the guy in that real estate ad on the lower left must be sick of replacing his sign after people draw funny mustaches on him.  Note to self: if you're ever going to put your face on an ad (probably one for Mr. Awesome's awesome super fabulous juice -- you don't always need a fabulous juice, but when you do, you need Mr. Awesome's), don't put it at street level where neanderthal sharpy-wielders can deface it's awesomeness.

Okay, so that was silly.  You know what's not silly?  Drugs.  They're bad people.  Well, except when you have a prescription.  Then they're the bomb.  Especially if you stop in and have Pharmacist Burch fill it for you.

It's been empty for awhile.  I think for at least as long as the year and a half or so since I moved back to Minneapolis.  Well, look at that.  It seems that the good folks at KARE 11 did a story about it closing in April of 2010.  So, yeah, a bit before my return.  Back in those days, I was still a hot-shot DC lawyer (or, um, sorta), so I didn't see it at the time.

It seems then place had been there for 80 years or so.  It seems the end was brought on by the lack of interest from potential buyers given the difficulties of the business in the face of competition from the big chains.

The folks from Spy Twin Cities, which I just discovered via Google but will have to keep an eye on, have a bit more for us (I love it when someone else has done the research).  They claim the place actually operated for 97 years, resulting from the combined forces of pharmacists George Ball and George Burch (who is not one of the people named Burch that show's up in the Historical Society photo archives). The Spy Twin Cities article is fabulous (how many times have I used that word?  Eh, it's Pride Weekend, so who cares), so I'll resist the temptation to summarize it here.  Please go read it for yourself.  They've got the kind of research, including old images, I only wish I had. I will, however, give you this shot of the streetscape at Franklin and Hennepin in 1953.

You might see a pair of smaller signs on either side.  Let's take a closer look, starting on the left: 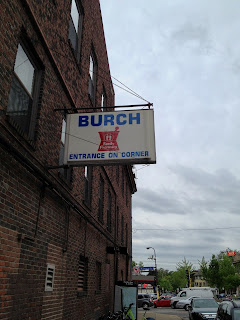 Oh, drugs aren't good enough for you (seriously, have you tried them?), okay then, let's go for kitschy, over-priced, corporatized "happiness" and "well-wishes": 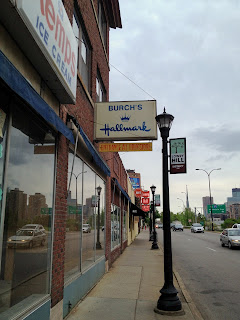 By which, of course, I mean Kemps Ice Cream.  Those folks really get my dander up.