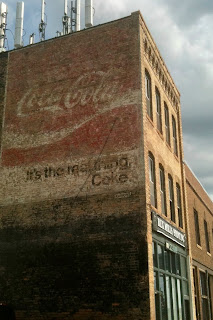 Coke's "It's the real thing" slogan seemed familiar to me, so I was surprised that it can apparently be dated fairly specifically to 1969, leading into the famous "I'd like to buy the world a Coke" ad and song. I would have thought that such a famous slogan would lead to an abundance of online trivia, so I was a little surprised when I didn't get much beyond wikipedia and that image searching lead me pretty directly to two Flickr entries for this very sign. It's on Washington Ave. N. near Broadway.

My Google image search also turned up this, which I had to use because it features "Buddy Christ" from Kevin Smith's Dogma. I can't tell for sure, but while the site seems sincere, I would guess that the author knew the source of this image. But it's more fun to think that he wasn't in on the joke.

On an unrelated note, it seems the Witt's mystery needn't have been quite so puzzling, at least if I had been able to ask the folks who decorated the Lund's in Nordeast. I snapped this iPhone shot of the vintage photographs behind the cashiers: 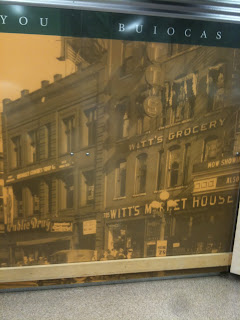