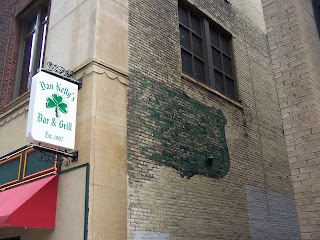 This is illegible, but it's one of the paint on brick events that first got me thinking about this little exercise, so I thought I'd throw it up here. I've got nothing to say about the unreadable sign itself, so, with apologies to Jason Mewes, I thought I'd use this space for some updates on territory we've already traversed.

The Downtown Journal has a handy interactive map about what's going on in property development, which touches on several of the buildings we've covered. In no particular order:

The Pillsbury A Mill has a new proposal for loft style apartments (no surprise there). No word on whether or not this is the kind of "piecemeal" redevelopment that worried some.

The Nicollet is still off, and the developer isn't talking.

Our mysterious distributor of mystery products, which the Journal calls the Marvel Rack building, has a new restaurant owned by the governor's sons, with plans for additional retail.

Next door to Witts, which used to be a Chevy's, could now be getting a deli. That seems fitting for the area.

Also in neighborly news, this time in the space next to the Grain Belt Brewery, the city is looking at proposals for residential and/or mixed use development (my vote, as always, is for the latter).

Finally, it's not really an update, but for me the best news is that the on again, off again Lunds in my neighborhood is back on again. I could really use a place to stop for groceries on the way home from work (that isn't Target).