Livin' It Up Until We Hit The Ground 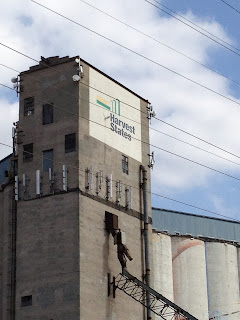 I've got some more foreign signs to work through in the backlog, not a few of which are from trucking and storage, but let's break things up a little and try to stay at home just a bit, so let's head out to Longfellow again.  As I promised, we've got more grain elevators.

The elevator's probably a bit older, but the sign looks to me like it's not from all that far back.  Harvest States should be a familiar brand to those from the Upper Midwest.  Honestly, I'm not entirely sure why, but I've heard of them, which means you should have too.

That said, it doesn't seem to say "Cenex Harvest States," so maybe that means the sign dates from before the merger of those two cooperatives in 1998.  The combined entity calls itself CHS, Inc. now, but it's still headquartered here in Minnesota, in Inver Grove Heights.  I'm not going to go too much into the company's complicated history of combinations and divestitures, but I was surprised to see among the many different transactions that Harvest States owned the Holsum brand.

It's hard to tell, at least to the untrained eye, whether this sort of facility is still in use, but it didn't look like it to me, except maybe as a cell phone tower (I think that's what those vertical rectangular things are).
Posted by Adam at 5:50 PM