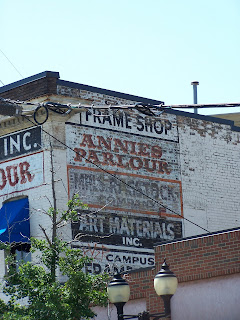 I was back on campus twice this week with the return of college basketball season, so let's head back to Dinkytown.  This building has paint-on-brick signs on three sides that are s snapshot of both the past and today.

Let's start with the present.  Annie's Parlour is a burger and malt institution that's been there since I don't know when.  Well, I say institution but I've only been there a few times and the last was at least twelve years ago, but hey, it's still there, so it's got that going for it.  It doesn't seem that to have its own webpage, but it shows up on a variety of user review sites.   This shot from Flickr gives a good perspective of the balcony that overlooks the space where the railroad tracks that may be the source of Dinkytown's name used to be. 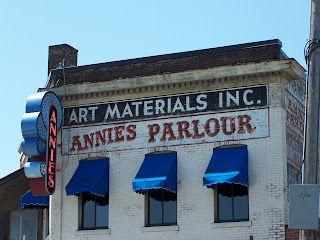 Next up is the partially ghost bit.  Ragstock still exists, but not at this location.  It's a second hand clothing company (started in 1954 to import and export used clothes) that operated at this location from 1979 to 2002 but closed due to declining sales and increasing rent.  I paid fifteen bucks there for a leather trench coat for a Halloween costume in college, but I moved away in 1999 and that clearly was the beginning of the end.  I'd like to take this opportunity to apologize to the Dinkytown community.  It's all my fault.  It's the Kitty Kat Klub today. 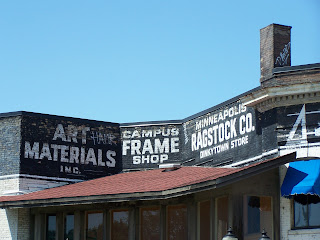