I'm Not Even Supposed To Be Here Today! 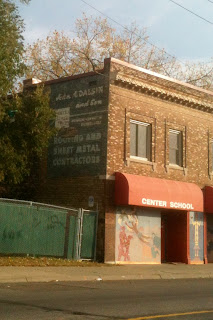 After reading the article I linked to in yesterday's post, about how Bloomington Avenue between Franklin and Lake used to be one of the city's most troubled streets, I got to thinking about the fact that I chose to walk on it precisely because it seemed less sketchy than some of the surrounding area.  I was curious about whether the renaissance that was projected in 2003 was real, or whether the bursting of the housing bubble set the neighborhood back.  There was only one way to find out.  That's right, I needed to give it another pass in the middle of the day on a bright, sunny, weekend afternoon.  Don't pretend that you don't know that's when the real heavy sh*t goes down.

Conveniently, having put in a hard half hour's worth of blogging, I decided that I should go get some beer (is there ever a bad time?) and headed over to Harriet Brewing to bolster my hipster street cred (only to undermine it again by not buying anything because they only had the West Side "Belgian" IPA which is way too hoppy for my taste even though I love Beligian beer and have never encountered anything from Belgium that is that heavy in hops).  I've brought home growlers from Harriet at least a half dozens times, but still I can never figure out the most efficient way to get there from my house.  But now that I know that Bloomington connects Franklin and Lake, I figured why not swing by and see how things are going, and then hook a left on Lake to get some tasty beverage?

So, I guess I won't keep you in suspense any longer.  Things looked fine.  I didn't see any noticeable prostitution or drug dealing, so, you know, yay! for urban redevelopment. (ETA: Apparently the heavy stuff was on the other side of town that afternoon.)

I did, however, find out that I had been delinquent on my last trip because I didn't even notice, much less snap, this sign that's just down the block from Welna's.  It's on the side of the NAWAYEE Center School, and alternative high school focused on American Indian youth.  With my priorities clearly focused on beer, I didn't bother to get out of the car to take this picture, which unfortunately means that it's a little hard to read (ah, the limitations of iPhone photography on an outdated phone).

But if you look closely you can see that it says "John A. Dalsin and Son" and "Sheet Metal And Roofing Contractors."  Turns out, the company's still around, or was whenever that website was built.  We are apparently on the third generation of Dalsin's, and the company dates to 1912. The Historical Society has a photo of the installation of shelves at a Dalsin Hardware at this address in 1949.  Finally, it seems our Mr. John A. Dalsin purchased some land somewhere in Minneapolis for $2,400 in 1906, but I don't know if that lot in "Petter's addition" is this property.

There is no word on Mr. Daslin's views about the innocence of the roofers who were slaughtered upon the destruction of the second Death Star.
Posted by Adam at 3:15 PM