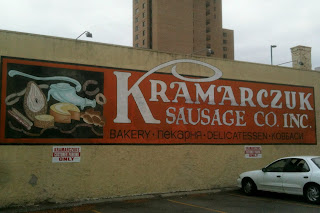 This one's not really a ghost, as Kramarczuk's is a going concern, but I like the sign and it's a Nordeast institution.  If you live in the Twin Cities and have you haven't heard of it, well, you must be under a rock or something.  If you haven't been there, your taste buds, at least the ones that like things like Polish sausage and cabbage and potatoes and things, should be waging a silent war on your heathen soul.

What I didn't know is that Wasyl and Anna Kramarczuk were from Ukraine and came to America in the late 1940s.  Their "about" page is a bit vague on the details as to when they opened the deli, but let's just go with "a long time ago."  Here's Walter and Horace K., and a good amount of their fine product in 1998.

Somehow I didn't know that it was featured on Diners, Drive-Ins and Dives.  Guy Fieri says the sausage making started in 1954 with Anna and Wasyl, but the cafeteria was added in 1976 (a good year) by their son.  Hopefully none of the various generations of Kramarczuk's caused Guy to freak out on account teh gay.

I really should not have posted this just before lunch.
Posted by Adam at 12:08 PM